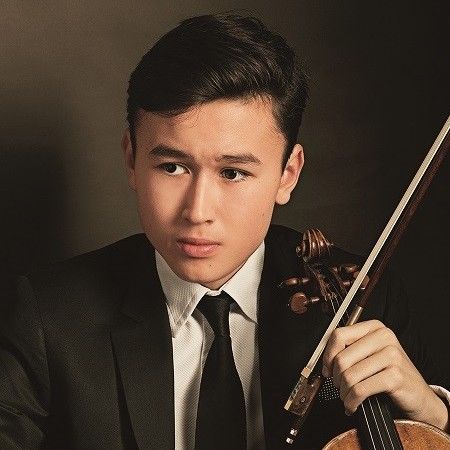 Daniel has a close collaboration with Valery Gergiev and the Mariinsky Theatre Orchestra, since they played together during the New Year’s concert 2015 at the Tchaikovsky Concert Hall in Moscow. He returned to the Mariinsky Theatre Orchestra to perform the Beethoven violin concerto at the closing anniversary concert of the 15th Moscow Easter Festival, and later at the Stars of the White Nights Festival in St. Petersburg, also the Baltic Sea Festival in Stockholm’s Berwaldhallen and at the Rotterdam Gergiev Festival with Prokofiev concerto. Daniel opened the Münchner Philharmoniker festival, MPHIL 360°, alongside Maestro Valery Gergiev and Munich Philharmonic Orchestra with Mozart violin concerto. He also performed the Bach Concerto for Two Violins with Shlomo Mintz and the Cameristi della Scala and Daniel Cohen at the Crans-Montana Classics 2016 New Year’s Concert.

Daniel has a love of chamber music and has enjoyed collaborations with, among others, Ivry Gitlis, Daniel Hope, Martin Fröst, and Maxim Vengerov. In September 2015, Daniel recorded a selection of Bartók’s Violin Duos with Daniel Hope for Deutsche Grammophon, having previously performed together on ARTE’s Concert television program.
Daniel is a regular performer at the Verbier Festival and many other international music festivals, the Progetto Martha Argerich in Lugano, Corinthian Summer Music Festival in Austria, the Colmar Festival, Moscow Meets Friends, the International Mstislav Rostropovich Festival in Baku, and the Sommets musicaux de Gstaad, where he returned in February 2016 to perform both the Bach Concerto in A minor BWV 1041 and Concerto for Two Violins BWV 1043 with Renaud Capuçon and the Festival Strings Lucerne. He also made his chamber music debut at the Aix en Provence Festival de Pâques in 2016 with Renaud Capuçon, and Khatia Buniatishvili.

At the Festival of the Nations Daniel has been awarded the prize of “The Young Artist of the Year 2017” and will perform with Munich Radio Orchestra and Mischa Damev.
Daniel has been awarded numerous international prizes including the 1st prize at the 2016 Vladimir Spivakov International Violin Competition; both the 1st Prize and the “Grand Prix” at the 2012 EMCY international music competition, “Ohrid PEARLS”, Macedonia; 1st Prize and the “Gulda Nutcracker” at the 12th Nutcracker International Television Contest for Young Musicians in Moscow, 2011; 2nd Prize at the “Yehudi Menuhin International Competition for Young Violinists”, Austin, USA, 2014, and the 2015 Manfred Grommek Prize from Kronberg Academy. Daniel won three prestigious awards: the “Viennese Classics”, “String Soloists”, and “Best Interpretation of Sarasate ‘Gypsy Airs’” at the 2014 International Summer Academy of the University of Music and Performing Arts, Vienna, Excelentia Prizes under the Honour Presidence of Queen Sofia of Spain.

In June 2016, Daniel Lozakovich signed an exclusive recording deal with Deutsche Grammophon and will begin his long-term cooperation with the label by recording two orchestral albums and a recital disc.
Since 2012, Daniel studies at the Karlsruhe University of Music with Professor Josef Rissin, and he is mentored by Eduard Wulfson. Currently, he is a student at the Collège du Léman in Geneva. In his limited spare time, Daniel enjoys playing football, boxing, tennis and chess.